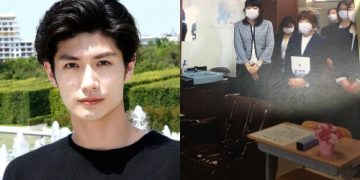 Actor Miura Haruma passed away in July 2020, but his funeral has not been buried until now for extremely heartbreaking reasons.

According to NHK, the funeral ceremony for Miura Haruma was delayed due to family discord. After the actor passed away, relatives had a dispute over the estate of 100 million JPY.
The battle for the inheritance that Miura Haruma left between the late actor’s father and mother has been tense for the past 2 years.
They went through 3 trials to fight for this huge fortune. The results of the final trial have not been announced yet, but according to many sources, his mother and stepfather won the final victory over his biological father.

The father who abandoned Miura Haruma for 20 years suddenly returned to claim his son’s inheritance. While his mother and stepfather wanted to inherit it completely. The relationship between Miura Haruma and her mother is not good. He was dissatisfied because his mother saw him as a money-making tool. Before his death, the actor cut off contact with his mother.

Miura Haruma was born in 1990, he started acting early in the movie Nairu in 1999. After that, his movie career started to flourish when he starred in many dramas such as Kimi Ni Todoke, Last Cinderella, Attack On Titan…