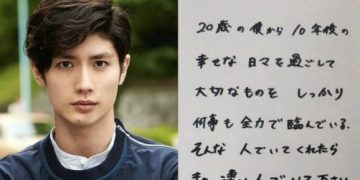 Currently, specific information about the death of Japanese actor is still being kept confidential.

Japanese media reported that actor Miura Haruma (30) was found hanged at 13 o’clock (local time) on July 18 at his home in Minato-gu, Tokyo. Police also found a letter believed to be a suicide note left by Miura Haruma before committing suicide. However, the specific content of the letter is still kept confidential.

However, recently the Chinese media has an article with content related to the cause of Miura Haruma’s suicide decision. Accordingly, the reason is believed to be because the actor “Titan War” has suffered from social network violence for a long time. The proof is that after Miura Haruma was discovered to commit suicide at his home, actor Kento Kaku – a close friend of actor “Great War Titan” had a post to refer to this.

Specifically, on his personal page, Kento Kaku wrote: “Social networking makes it easy for people to see what they like and what they want to do, but it will also show you what you like or dislike. I hope. that social media can bring more positive power. ”

Returning to Miura Haruma, the actor was also controversial earlier this year when posting an article on his personal page. Immediately, his article attracted the attention of “keyboard heroes”, some netizens left extremely negative comments to talk about male actors. However, this is just a judgment of netizens, absolutely no concrete evidence.