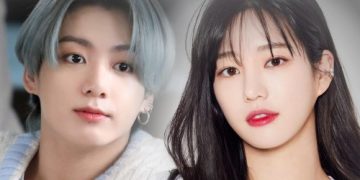 Recently, a Youtuber spread suspicions that Jungkook and Lee Yoo Bi started having a relationship in 2018, but only recently publicly expressed their feelings.
Worth mentioning, the evidence that this YouTuber gives is mostly based on the “Lovestagram” judgment. For the first example, Lee Yoo Bi is a fan of Jungkook and often posts purple hearts – BTS’s iconic color on SNS. Second, on the night Jungkook returned home after finishing his schedule in the US, Lee Yoo Bi also posted a photo of him hanging out and leaving the same heart emoji. Third, the two of them wore a Man to Man T-shirt and a pair of bracelets. Fourth, Lee Yoo Bi chose someone with beautiful and manly eyes as her ideal type and said that she likes September the most (Jungkook’s birthday month). Finally, Jungkook’s brother and Lee Yoo Bi’s younger brother followed each other on SNS.
Moreover, this Youtuber is a person who specializes in spreading rumors about BTS and K-Pop stars that V (BTS) once claimed to personally sue.
Jungkook and Lee Yoo Bi’s side also denied the dating rumors. The stance of both sides is “Absolutely that is not true.”