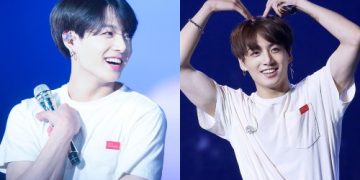 This famous male idol is known for being not only cute but also sexy.
There are many popular male Kpop idols born in 1997 such as Jungkook (BTS), Jaehyun (NCT), Cha Eun Woo (ASTRO), Mingyu (SEVENTEEN)… 97-liners draw attention for their handsome visuals and outstanding charms.

But if fans were to choose the most good-looking male idol among 97-liners, who would it be? Recently, Kpopmap has announced the voting results of the most handsome 1997-born male idol, and the winner is Jungkook. BTS’s golden maknae is considered to be completely deserving of getting 1st place. He has a face with a golden ratio, big and round eyes, a tall and straight nose, gorgeous skin like a baby, and sexy lips with cute rabbit teeth.

Jungkook can nail both a cute, refreshing and a sexy, mature concept. Jungkook’s visuals have not only been recognized domestically but also internationally as he has entered the top of the world’s most handsome faces for years. He also ranks high in various visual charts.

Yugyeom (GOT7), Mingyu (SEVENTEEN), Jaehyun (NCT), Cha Eun Woo… are all handsome but Jungkook still outranks them in the poll