The scooping information that netizens are dizzying is the POP FM 91.7 program interviewing a Korean showbiz expert. It is worth mentioning, in this interview, the expert confirmed that Hyun Bin – Son Ye Jin was dating, and at the same time revealed more about the couple’s relationship, how the management company handles, more special dragged two more names Song Hye Kyo – Song Joong Ki into the game.

Specifically, in this interview, the expert confirmed that he had worked many times with actor Crash Landing On You, praising Hyun Bin as a person with a cold personality but very sincere. When the MC asked about the photos of Hyun Bin and Son Ye Jin taken in the US, the expert added, “There will be many celebrities who choose to publicize their feelings, but the couple acknowledged the incident with a more mature, rational attitude, ‘We don’t need to be loudly talking about our personal things to the media.’ They want to wait for this relationship to become more stable then confirm. That’s what I think they’ll do. ” 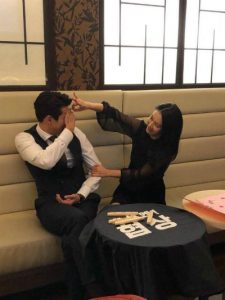 Because of this expert’s mysterious attitude, the MC asked for more details. This person said, starting last year, they heard from Kbiz that their relationship is very good, everyone sees that there is a good cooperation between the two sides, which is why Son Ye Jin and Hyun bin act together in the romantic drama Crash Landing On You.

Many people think that the couple will be public, however, according to this expert, over the past time, showbiz has many couples – for example Song Song (playing Descendants of the Sun), the finished film has been announced quickly. However, there is no happy ending, making the public feel disillusioned.

“This time, they don’t want things to be explosive, sudden. They don’t openly let people have speculation. Being together for a long time is a challenge. A relationship. Therefore, it should not be hasty, if you are in a hurry to announce it, it is possible to break up quickly “- this expert commented.

The MC of the show asked this person once again to emphasize that Son Ye Jin and Hyun Bin’s love story is not a PR trick for the movie, nor is it fabricated news and received expert confirmation. Kbiz on. In addition, this person also said that when photos taken in the US were widely shared, the management company had considered announcing the good news, but they decided to keep everything secret.