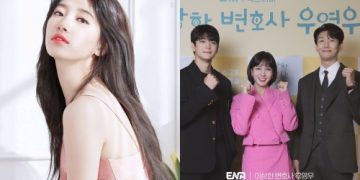 Earlier on the 28th of last month, production company ASTORY unveiled its A-list lineup of OSTs for “Extraordinary Attorney Woo.”

The OST lineup includes Kim Jong-wan and SWJA, the vocals of Nell. “Brave” sung by Kim Jong-wan and “Beyond My Dreams” sung by SWJA were released on various online music sites on the 29th and 30th of last month, respectively.

In addition, singers Suzy, Wonstein, O3ohn, and group Maytree are drawing keen attention as they are named in the lineup of “Extraordinary Attorney Woo” OSTs. Suzy is known to have participated in an OST due to her friendship with producer Yoo In-sik, who directed her previous SBS “Vagabond.” The specific releasing schedule of Suzy, Onestein, Ozone, and Maytree’s “Extraordinary Attorney Woo” OST is not known.

“Extraordinary Attorney Woo” is a drama that depicts the survival story of rookie lawyer Woo Young-woo (Park Eun-bin) with a genius brain and autism spectrum at a large law firm.