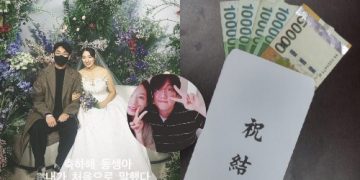 As seen previously, actress Park Shin Hye and actor Choi Tae Joon tied the knot a few days ago, and countless congratulatory messages flooded the couple’s wedding. Many celebrities attended the ceremony, including actor Lee Min Ho, Hongki, and others who have previously worked with Park Shin Hye.
There is a curious point for fans, what wedding gifts did newlyweds Park Shin Hye and Choi Tae Joon receive from their relatives and friends?

A wedding attendee recently revealed that the bride’s brother is said to have given his sister and brother-in-law a white envelope filled with cash.
This will definitely be a great gift to help the newlyweds pay their wedding expenses.

Previously at the wedding of Song Hye Kyo and Song Joong Ki, the Song-Song couple can be seen holding hands with matching gold bracelets in the photo. The photo was posted alongside the caption, “The gold bracelets that Director John Woo from Hong Kong gave as a gift.” 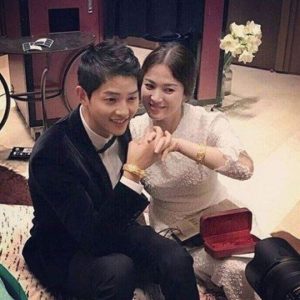 In Korea, It’s unclear when gold jewelry and the cash-giving tradition here came into being. It apparently originates from the time-honored community practice of sharing labor in a give-and-take manner when holding big family events.