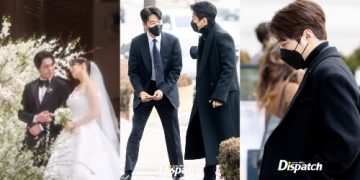 Today (January 22), Park Shin Hye and Choi Tae Joon will walk together into the aisle at a church in Seoul, Korea to hold a wedding ceremony.
Many guests have begun to appear, currently according to our update, there are EXO’s DO Kyungsoo, Kim Bum, Ryu Jun Yeol, SeolHyun, Lee Hong Ki and many stars wearing masks appearing at this super wedding.

Previously, Park Shin Hye surprised the public and the media when she suddenly announced her marriage to Choi Tae Joon and was pregnant with their first child. Due to the epidemic situation and not wanting to make it public, the couple decided to hold a small ceremony at the church in the presence of both families.

The couple got to know each other after attending the same university as seniors and juniors. Then, in 2018, the couple had their dating image published by Dispatch and officially announced each other.