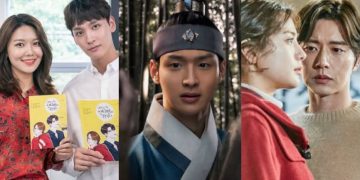 6 K-Dramas That Wasn’t Aired and Got Cancelled Due To Unfortunate Situations;

Did you know that there are a lot of k-dramas that ended up being officially canceled even though they have aired some episodes, finished filming and promoted the drama.

K-dramas that were canceled are due to unfortunate situations such as conflict with the cast and production, controversy and criticism. Below are the 6 K-Dramas that will no longer air and got permanently canceled due to some unlucky situations.

Here are the 6 K-Dramas That Wasn’t Aired and Got Cancelled Due To Unfortunate Situations;

Kim Yohan and Ahn Seo Hyun drama School 2020 was supposed to air last August 2020.However due to the conflict with Ahn Seo Hyun’s father regarding his demanding request to the producers , Ahn Seo Hyun was removed from the cast list. The producers of the drama decided to change the female lead, they offered the role to actress Kim Sae Ron.

Ha Ji Won and Jin Goo most anticipated drama Prometheus was canceled due to the cast schedule conflicts. MBC , the supposed to be broadcasting network of the drama “Prometheus” also announced that the drama will no longer air , after this a lot of cast including Jin Goo dropped out of the drama.

Park Hae Jin and Nana highly anticipated drama “Four Sons” was cancelled due to the production company’s unreasonable request and were not paying their staff members. A lot of cast started to dropped out the drama including Nana and Park Hae Jin even filed a lawsuit against the Production Company of “Four Sons”.

3. So I Married An Anti-Fan

Girls’ Generation‘s Sooyoung and Choi Tae Joon most anticipated K-Drama version of “So I Married An Anti-Fan” was canceled due to the problem with finding a broadcasting network to air the drama that led the drama to never get released.
Update: However, in April 2021 it was accepted to air on Naver TV, but, it was a cut version and was omitted a lot of the time.

Wolf was supposed to be a 16 episode drama, but it got permanently canceled with just three episodes. The reason is because of the conflict with the cast members getting injured including the male lead Eric, that causes the filming to got delay.Wolf was going to resume once the cast members recovered but due to the constant postponements of the drama they decided to cancel the show.

SBS announced that the drama “Joseon Exorcist” will no longer air after just 2 episodes due to historical distortion and use of Chinese Props controversy. The drama received a lot of negative criticism from the viewers and more than 196k people signed a blue house petition for the drama to stop airing.