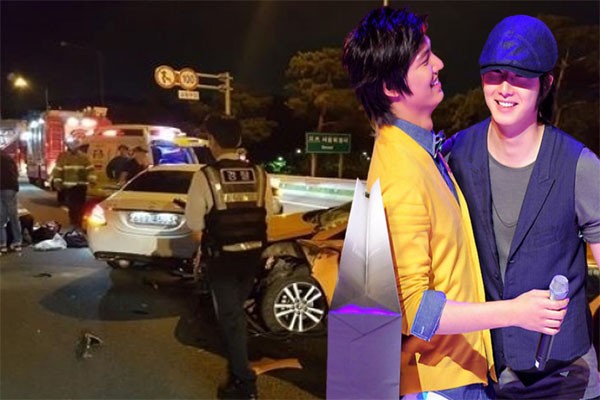 The horrific accident caused Lee Min Ho – Jung Il Woo to stay in the hospital for 7 months and the unexpected turning point after escaping death!

The horrific accident caused Lee Min Ho – Jung Il Woo to stay in the hospital for 7 months and the unexpected turning point after escaping death!

After a serious car accident in 2006, both Lee Min Ho and Jung Il Woo became famous names, sought after by Korean people.

Lee Min Ho and Jung Il Woo were born in 1987, the two male actors who not only live near their home but also have been best friends since high school. In 2006, while hanging out, the two actors had a terrible accident that both had to be hospitalized for months and still have sequelae. When appearing in the program “Happy Together”, the actor “Cinderella and the 4 Knights” told the details of the accident as well as the life of the guy and his best friend Lee Min Ho after the accident. This royal.

Accordingly, before the accident, Jung Il Woo auditioned for the role of the movie “Unstoppable High Kick” (Family is No. 1). When the accident happened, the actor thought he would lose the role but luckily, the recording time was rescheduled. After that, the actor had to lie to the director about his health to be able to film. After the success of the movie, Jung Il Woo gradually became famous, more and more popular. As for Lee Min Ho, after he was discharged from the hospital, he starred in the movie “Boys Over Flowers” and became a cult name that was sought after by Asia.

Before this horrific traffic accident, Lee Min Ho was a small, unknown actor. It was not until he joined “Boy Over Flowers” as the prince Goo Jun Pyo that Lee Min Ho became the most sought after young star in Asia. Actor 8x not only shines once and then shuts off but continuously confirms his ability through a series of hit works such as “City Hunter” (City Hunter), “The Heirs” (Heirs), “The Legend of the Blue Sea “. Currently, after enlistment, Lee Min Ho is preparing to return to the screen with the movie “King of eternity”. Worth mentioning, the hotness of this male actor is so great that the public has to hold their breath to wait.

The incredible heat of Lee Min Ho helped him become a powerful name with a huge income. As of 2017, Lee Min Ho’s film remuneration is about VND 1.3 billion for each TV episode. Salaries attended the event of male actors also cost more than 18 billion. Not to mention, during the period of 2009 – 2016, Lee Min Ho also regularly participated in domestic and foreign advertising.

Jung Il Woo’s career developed but constant illness
After the accident, Jung Il Woo also achieved much success in the incident. The movie “Unstoppable High Kick” has made Jung Il Woo one of the most popular Korean names. After the initial success, in 2008, Jung Il Woo officially touched the big screen through the movie “My Love”. Following that, the actor also participated in other hit series such as “49 days”, “Cinderella and 4 riders” and most notably the super product “Moon hugging the sun” … Jung Il Woo takes a step into the male idol of many girls.

However, in 2016 the actor was diagnosed with an aneurysm. Because of this disease, Jung Il Woo was seriously depressed. Fortunately, the actor was able to overcome this dangerous disease after all. Currently, fans are looking forward to the actor’s comeback work.