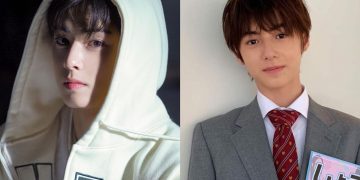 Cha Eun Woo  is a popular singer ,actor and model, he is a member of K-Pop Boy Group ASTRO and most of his fans and supporters call him the “visual genius” and “face genius”, thanks to his bright smile , charming and excellent & perfect looking visual. Cha Eun Woo also gets compliments from doctors , and according to a doctor his face can really be described as perfectly symmetrical and natural beauty.

After the massive success of hit drama series “True Beauty”, K-Netz began to name celebrities that resemble Cha Eun Woo in which they’ll possibly pass as real brothers just by viewing their picture.

Here are the 4 celebrities that fans think they have a big resemblance to Cha Eun Woo:

First within the list is the Japanese Actor and Model Alex Sho , he is 14 years old and born in Los Angeles, California. He’s also half Japanese and Half German. Fans think that Alex Sho is the younger version of Cha Eun Woo and that they can possibly pass as real siblings.

Kim Min Kyu could be a South Korean actor, singer and model , he was born on March 12, 2001. Min Kyu starred and played the male lead of Playlist Web Drama “Pop Out! Boy”. Some of his fans think that he resembles Cha Eun Woo a lot because of his smile , fashion and charming personality.

Darren Chen is a Taiwanese actor and model , he was born on January 15,1995. He’s best known for his roles in Chinese Drama “Meteor Garden” and “My Unicorn Girl”. Fans notice that Cha Eun Woo somewhat looks like Darren Chen because of his recent photoshoot with GQ Korea.

Do you also think that these 4 Celebrities seem like Cha Eun Woo?