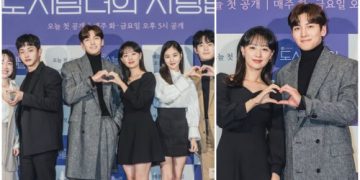 Ji Chang Wook and Kim Ji Won became the focus of attention during the press conference to launch the new film.

On the afternoon of December 22, the first official press conference of the movie Lovestruck in the City took place with the participation of the cast. The event featuring the main cast including Ji Chang Wook, goddess Kim Ji Won, and supporting cast Kim Min Seok, So Ju Yeon, Ryu Kyung Soo and Han Ji Eun attracted media attention and audience.

It is worth mentioning, the reunion of two actors Descendants of the Sun and the excellent couple Ji Chang Wook – Kim Ji Won could not help but make the public excited. Kim Ji Won wore an elegant black-tone short skirt, showing off her long straight legs and admirable slim waist. The actress continuously beamed brightly, captivating fans with her sweet beauty. As for Ji Chang Wook, the actor wore a shirt, still handsome and stylish as usual. The lead couple embraces their arms, laughs constantly while standing side by side, and the two supporting couples are equally beautiful. It must be said that the beautiful moments of the two actors make the audience extremely love them.