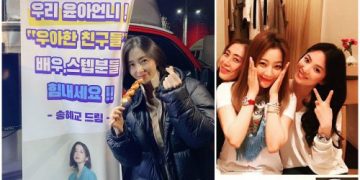 Song Hye Kyo sent food trucks to the studio to give “big sister” Song Yoon Ah – This is Song Hye Kyo’s closest sister, helping her overcome the divorce!
Song Yoon Ah is known as a beauty who has always been with the Korean screen jewel Song Hye Kyo since she started joining the showbiz.

Song Yoon Ah and friendship lasted nearly 2 decades with Song Hye Kyo
At the end of 2019, Song Yoon Ah was in the film 19+ Graceful Friends.
At this point, Song Hye Kyo announced a one-time break from filming and somewhat avoided the post-divorce media Song Joong Ki.

The two teamed up with actors Bae Yong Joon, Kim Seung Woo … and released a series of emotional and meaningful movies Hotelier

At the time of this drama, Song Yoon Ah was a famous star and had a rich acting experience.

Meanwhile, Song hye Kyo hits 20 and is also a star sought after by the hit drama Autumn Heart.

Song Hye Kyo and her seniors also often travel together with a regular frequency.

When Song Hye Kyo sent the girls the food truck to the drama ‘Great Friends’ School’, Song Yoon Ah was moved. “Big sister” took a picture “showing off” to fans on Instagram accompanied by a caption expressing her love and intimacy with her younger brother: “Unbelievable, what a surprise. I love you … forever “.

Both are scandals that aren’t worth around their private lives
Song Yoon Ah once dated Ahn Jae Wook – the movie actor Dream of reaching a star.
The couple even thought about getting married but right before the wedding, the couple even broke up without declaring the reason.

However, before getting married with the actor Sol, the 47-year-old star suffered a lot of bad reputation.
Song Yoon Ah is the second wife of Sol Kyung Gu.

Previously, this actor had a marriage but was not stable. Around this noisy love affair, many rumors said that the actor surnamed Song was the third person that broke Sol Kyung Gu’s family.

Although the beauty denies all rumors, many netizens still grumble.

Meanwhile, the married life of junior Song Hye Kyo is also not very smooth. In the midst of the noisy marriage breakup with Song Joong Ki, Song Hye Kyo was also involved in the noisy, minor affair and fake.

Before these accusations, Song Hye Kyo completely kept quiet and focused on her advertising career.