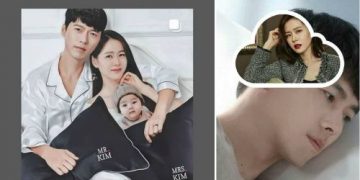 Yoon Se-ri (Son Ye Jin) was pregnant with Ri Jeong-hyeok (Hyun bin) in Crash Landing On You season 2?
According to the pinkvilla online newspaper, fans of Crash Landing on You had previously hypothesized that Son Ye-jin would get pregnant in part 2 of the series thanks to certain behind-the-scenes photos from the last episode of movie . And they hope that this detail will be the start of the movie for the second part!

According to the latest report from pinkvilla, nearly 7,000 fans have signed the petition asking the producer to continue the second part of the movie in the presence of the couple Hyun Bin and Son Ye Jin.
Although it has not received official confirmation from the producer, pinkvilla thinks that the manufacturer has started searching for a suitable location for Crash Landing On You season 2 to be recorded in the context of Covid-19 disease. is happening all over the world.
Debunking the popular theory, a source from CLOY told Osen at the time, “I think this [the photos leading to speculations about Yoon Se-ri’s pregnancy] is something that came about simply because viewers have a lot of interest in the drama. It’s nonsense,” via Soompi.

While the rumours were put to rest, it doesn’t stop fans from fantasising about what happened to the beloved Crash Landing on You pair after series end. Moreover, with talks of CLOY Season 2 on the pipeline, let the fan theories continue!