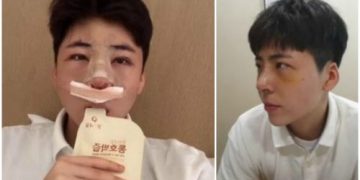 The male student known as "Park Bo Gum copy" spent a large amount of money on plastic surgery to be more like the famous actor.

Kim Min Seo was born in 2001 and is famous for her nickname “a copy of Park Bo Gum“. In May, the male idol appeared on KBS’s Ask Anything, South Korea. In addition to answering questions about himself, the male student also shared many things about his popularity associated with the actor Park.

However, after the show, Min Seo received a lot of criticism from the audience because of the fact that he was not like Park Bo Gum at all. Soon after, Min Seo had an unexpected act of cosmetic surgery to resemble the famous actor. 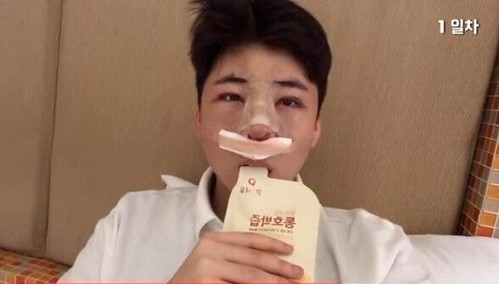 In the latest Vlog video, Min Seo revealed that he lifted his nose and eyes and injected his chin filler to have a face like Park Bo Gum. Prior to this action of Min Seo, the public made a mixed opinion: “Um.. this is kinda getting out of control.”

“I don’t understand the haters. Why leave hate comments on his YouTube channel? Just don’t feed him any attention.”

“Oh no.. he is still in high school. Too young to undergo plastic surgeries.”

“Honey, you need professional help. This is not healthy at all.”

“Can’t he just let go of Park Bo Gum? His obsession is creepy.”
What do you think?
Min Seo gained attention from 2018, when his selfie series posted many forums to share and compliment like actor Park Bo Gum. Men living in the city of Busan mostly post photos of them in profile or near-face. At the time, the actor was born in 1993 causing fever in many Asian countries thanks to the success of the Reply 1988 series, Moonlight Drawn By Clouds. Therefore, Min Seo has received more and more attention and curiosity from netizens. But Min Seo received offensive comments from netizens later and was forced to resort to legal intervention.