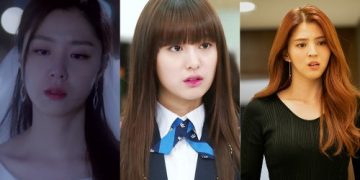 These K-dramas female antagonists may be cunning, but they are drop-dead gorgeous.
1. Kim Ji Won – The Heirs
In “The Heirs”, Kim Ji Won played Rachel Yoo, an arrogant highschool girl who was fiancée to Lee Min Ho’s character Kim Tan and heir to the RS International Firm. Rachel Yoo was hailed as the Paris Hilton of Jeguk High School, and absolutely detested the female lead Cha Eun Sang (played by Park Shin Hye). However, this character is adored by many people for her chic style and stronger personality – opposite of Eun Sang’s crybaby and spineless nature.

2. Han So Hee – The World of The Married
In “The World Of The Married”, Han So Hee transformed into Yeo Da Kyung, who seduced the female lead’s husband and made our blood boil. However, the character’s outstanding visuals were just out of this world, basically launching actress Han So Hee to stardom.

3. Han Ji Hyun – Penthouse
Joo Seok Kyung (Han Ji Hyun) is one of the most self-centered, mean, and villainous characters of “Penthouse”. She enjoyed bullying innocent kids, and disrespected her own mother. But thanks to her pretty visuals and redemption arc at the end of the drama, Joo Seok Kyung’s misdeeds are forgiven by many viewers. She is even praised for being more interesting and less annoying than Bae Ro Na, one of the rare nice characters of “Penthouse”.

4. Seo Ji Hye – Black Knight
Sharon (Seo Ji Hye) is the past life wife and a threat to the main couple’s relationship in modern times. Sharon’s insatiable jealousy drags 3 people into a whirlpool of resentment that lasts many lives. However, many viewers feel sorry for her because she has to watch her husband fall in love with another woman. Her elegant beauty and good acting also helped Seo Ji Hye “eat up” Shin Se Kyung.

5. Kim So Yeon – Penthouse
The most charismatic antagonist of “Penthouse” is none other than Cheon Seo Jin (Kim So Yeon). With her brilliant acting and alluring, classy appearance, Kim So Yeon’s perfect portrayal of Cheon Seo Jin makes the character as attractive as the protagonist Shim Su Ryeon (Lee Ji Ah). Kim So Yeon also surpassed her co-stars in real life to be nominated and won many prestigious acting awards for her performance in “Penthouse”.