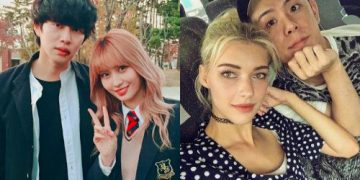 When it comes to love , Nationality doesn’t matter!

Korean celebrities are just like ordinary people, they can go out , hang out with their friends and can also date without worrying anything or what other people say . They have their own freedom to date or go out with the person they are in love with. It is also not new to us seeing a lot of celebrity couples especially when it comes to Korean celebrities who were in a relationship with foreigners. In this article we will share with you some male celebrities with foreigner girlfriend.

Here are the 5 male celebrities included in the list;

DinDin admitted that he was in a relationship with a woman from Germany. He said that he met her when he studied abroad in Canada.

Beenzino and Stefanie Michova have been together since 2015. The two revealed their relationship to public and oftentimes show off their romantic dates on social media.

Back in 2012, Ryu Seungbum was in a relationship with his French girlfriend. Unfortunately, after one year and 8 months, they broke up.