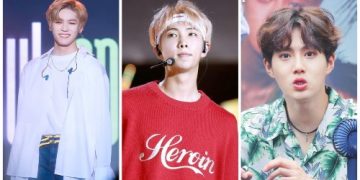 On May 17, Dispatch released a list of male idols who are the best leaders.
Team leader is an extremely important member of a music group, they are the leader and coordinator to bring the group to development.
And here’s the list:

1. BTS’s RM
Topping the list is the leader of BTS, RM.

Kim Nam Joon is better known by his stage name RM (formerly Rap Monster), is a South Korean rapper, songwriter and record producer. He is the leader of the South Korean boy group BTS. In 2015, he released his first solo mixtape, RM. In October 2018, his second mixtape, Mono, was the highest charting album by a Korean soloist on the Billboard 200 chart, having peaked at 26.

RM is considered the most talented leader in K-biz when he led BTS to become the most influential group in the world.
2. EXO’s Suho

EXO’s leader Suho is the second on this list.
Kim Jun Myeon was born May 22, 1991, better known by his stage name Suho (meaning “guardian” in Korean), is a South Korean singer, songwriter and actor. He is the leader and a vocalist of the South Korean-Chinese boy group Exo and its sub-unit Exo-K. He debuted as a soloist on March 30, 2020 with the release of his EP, Self-Portrait.

His nicknames include “The Leader”, and he is known for his exemplary, polite, and caring personality. He is known to be the best public speaker among the members.

Lee Tae-yong , professionally known by the mononym Taeyong, is a South Korean rapper, singer, dancer, and songwriter. He is best known as a member and leader of the boy group NCT. In 2016, he debuted in the group’s first sub-unit, NCT U, and later that year went on to become the leader of the second sub-unit, NCT 127. As a songwriter, Taeyong has participated in writing over 30 songs in four languages, released mostly by NCT’s various units.
4. NU’EST’s JR

S.Coups is famous for leading the group SEVENTEEN, and he is also the leader of the Hip-Hop Unit. He is famous as a talented leader and always sets an example for the members to follow.

Jungwon is the youngest leader on this list at only 17 years old.
Jungwon is a South Korean singer under Belift Lab. He is a member and the leader of the boy group ENHYPEN.

On June 2, 2020, Jungwon was introduced as a contestant in the CJ ENM and Big Hit Entertainment’s reality survival show I-LAND.[1] On September 18, 2020, he ranked 1st place by global votes and became one of the members of the boy group ENHYPEN.