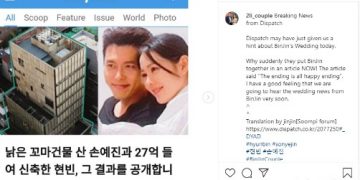 Every time Hyun Bin and Son Ye Jin appear on Dispatch will make the audience excited!

This is a re-sharing of an Instagran account that is causing a storm!

“Dispatch may have just given us a hint about BinJin’s Wedding today. Why suddenly they put BinJin together in an article NOW! The article said “The ending is all happy ending”. I have a good feeling that we are going to hear the wedding news from BinJin very soon. “

However, this is only an article analyzing how Hyun Bin and Son Ye Jin invest in real estate by Dispatch. But many fans still said that Dispatch was implying information about the wedding!

Son Ye-jin and Hyun-bin have both acting skills, appearance, and star characteristics. He showed a special chemistry in the tvN drama “Crash Landing on You,” which ended with the highest viewership rating of 21.7% in February. The two of them continued to have dating rumors from before to the end of the drama. One of those things in common is that they are famous for their excellent real estate investment skills in the entertainment world. The investment method seems similar and different. How do they invest in real estate?

At the same time as her debut, Son Ye-jin rose to stardom with her innocent and pretty appearance and excellent acting skills. She is considered one of Korea’s top actresses, expanding her range to action, thriller, and comedy, as well as melodies that match her appearance. His major films include’Classic’,’The Eraser in My Head’, and’My Wife Has Married.’
On the right and left of the building that Son Ye-jin purchased, Son Ye-jin purchased about 150 pyeong of land and buildings in the area of ​​Seogyo-dong, Mapo-gu, Seoul for 9.35 billion won in March 2015. It is known that it received about 6.5 billion won in loans. In February 2018, three years later, the building was sold to private investors for 13.5 billion won. Only the market profit is 4.15 billion won.

The area of ​​Seogyo-dong, which Son Ye-jin purchased, is located at the corner of the main street of Hapjeong Station and has the best location. Hapjeong Station is close to Hongik University Entrance and Mangwon Hangang Park, which has excellent commercial areas. Also, there was Mecenatpolis, a high-end residential and commercial complex, where residential and commercial areas were developed evenly. Son Ye-jin had purchased an old two-story building and its neighborhood. As a landmark near Hapjeong Station, it is a very small and old building compared to the high-rise buildings that are fiercely fighting. However, since Hapjeong Station is one of the top locations in Seoul, experts analyzed that if the building is constructed, a market price margin of close to 10 billion won can be obtained from the investment.

Hyunbin also appeared in big works from the beginning of her debut and made a clear eye stamp to the public. As a rookie, he built up his acting skills as a supporting role in sitcoms and movies, and continued the box office streak with dramas such as MBC “My Name is Kim Sam-soon” and SBS “Secret Garden”. Hyunbin’s drama is a drama that he believes and sees, and is supported by viewers.

The current frequency has also succeeded in investing in a building worth 10 billion won. The building was an old building in the residential area, not in the station area, but Hyunbin directly raised the value of the building. It is the building at 128-2, Cheongdam-dong, which was purchased for 4.8 billion won in 2013. At the time of purchase, Hyunbin built a multi-family house with 1 basement level and 4 floors above ground as a neighborhood living facility with 5 stories below and 7 stories above the ground. It cost 2.7 billion won for the new construction.

As for the existing multi-family housing, 7 households lived on a cheonsei basis, so there was no reasonable income except for a deposit of 1 billion won. By changing to a neighborhood living facility, Hyunbin’s building generated a monthly profit of 3.5 million won on a deposit of 400 million won. The secret to success is finding a property for sale that can be newly built and can benefit from area. The new construction has more than doubled the existing gross floor area of ​​651㎡ to 1,593㎡. At that time, it attracted attention as an exemplary investment case developed by purchasing an old building in an area with high investment value at a low price. Recently, the market price of the Hyunbin building was estimated to be 9 billion, and it attracted attention once again.

Son Ye-jin and Hyun-bin walked well not only as actors but also as real estate investors. The two had in common that they bought an old, low-yielding building. Son Ye-jin invested in a two-story building and chose location conditions and favorable conditions over the rate of return. However, Hyun Bin gave up the location conditions and good news and made an investment to increase the rate of return. Just because both of them gave up on either side was not an investment without investment value. This is the case when you discard what you discard and choose conditions that are well worth the investment.

The two people who received a lot of love for drama this year during “Crash Landing on You,” ended with a happy ending. They have a happy ending in real estate investment as in the drama.