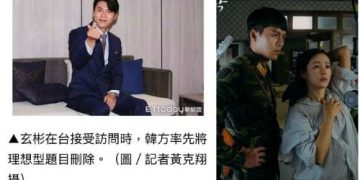 Since Hyun Bin – Son Ye Jin combined in two TV projects, The Negotiation (2018) and Crash Landing On You, as well as revealing dating photos, netizens are constantly paying attention to the relationship. of both despite many times the two popular stars deny the love story.

Recently, netizens continued to dig by a series of articles during Hyun Bin’s fanmeeting in Taiwan in April 2019, in which “leaked” evidence of love with Son Ye Jin. Specifically, the article states that when the MC sent questions to Hyun Bin, Hyun Bin’s agency side deleted the question: “What is your ideal type of girlfriend”..

Not only that, when participating in interviews for a number of Taiwanese newspapers, Hyun Bin is also not allowed to ask questions related to the girlfriend’s model. At that time, the two were just working together on a movie project Life and Death Negotiation and exposing photos of dating abroad.

Next, when the MC questioned about the next TV project that Hyun Bin was about to participate in, the actor also ambiguously said, “I am still carefully considering” without revealing the project he want join and who will be involved with him. However, exactly one month after the fanmeeting was held in Taiwan, Hyun Bin and Son Ye Jin both confirmed to the Korean media that they would cooperate in a drama Crash Landing On You.

Because of this, the audience raised the question of Hyun Bin trying to cover up the relationship with Son Ye Jin, so all information related to this special woman was kept private.

Once again, Hyun Bin and Son Ye Jin’s shady relationship continues to be spotted by netizens.