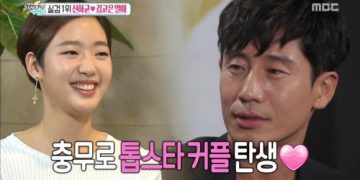 Kim Go Eun: The only girl who stole Shin Ha Kyun’s heart!
Shin Ha Kyun was born on May 30, 1974 in Seoul, South Korea. He trained in acting professionally at the Faculty of Arts, Seoul University. Before coming to cinema, Shin Ha Kyun participated in many plays as a stage artist. Since the age of 19, Shin Ha Kyun has been shining in the Korean entertainment industry.
Up to now, after more than 20 years working in the Korean entertainment industry with great success, he is currently single.

He love story also made many people interested. Up to now, Shin Ha Kyun has had an official love affair with Kim Go Eun .

Kim Go Eun and Shin Ha Kyun suddenly announced dating from June 2016. At that time, the whole Korean showbiz was shocked, many fans protested because of their age, Shin Ha Kyun was 17 years older than Kim Go Eun. Many fans even predicted that they would break up quickly.
After only 8 months of being together, the couple surprised Korean Showbiz by announcing their breakup due to busy schedules and no time for each other.
After the Korean media published the information, the management company of the two actors also confirmed.
The company said, “The two broke up at the end of February. They felt apart because of their busy schedule. They will continue to maintain their hoobaes, seniors and help each other at work. “.

According to the media, the large gap in age makes the two of them gradually separate from each other and think that the feelings are not love but only feelings of “Seniors – juniors”.
Honestly, Shin Ha Kyun is really not suitable for Kim Go Eun, Because the age gap is too big, it will easily cause them to have disagreements about lifestyle, … So the fact that they broke up does not cause the audience surprise.
However, the media also revealed that Shin Ha Kyun really loved Kim Go Eun a lot. Up to now, Kim Go Eun is still the only girl who steals Shin Ha Kyun’s heart.