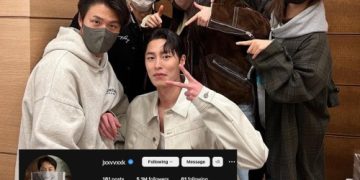 Lee JaeWook has become the fan-favorite heartthrob Korean actor since his role as Jang Uk in the hit K-Drama franchise “Alchemy of Souls”.

He has always been known in the industry as an actor who has acting capabilities beyond his years. In other words, he is known for being an actor who is so talented that you’d think he is a veteran who debuted way before 2018.

As a result of more fans recognizing his talents, he has had a huge increase in Instagram following.

As of Jan. 11 (KST), Lee Jae Wook has surpassed 5.1 million followers on Instagram!

This means that more fans will be able to enjoy his Instagram filled with his fond memories, behind-the-scenes photos from his K-Drama sets, boyfriend material photos, and fashion brand collaborations/photoshoots.

Here is his latest post on Instagram with fellow cast and crew members from “Alchemy of Souls: Light and Shadow”.