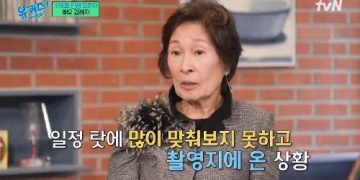 Recently, veteran actress Kim Hye Ja shared a story about how she was scorned by a writer who was more than 20 years younger than her.

In the new episode of tvN’s talk show ‘You Quiz on the Block’ that aired on January 11, Kim Hye Ja appeared as a special guest. On this day, Kim Hye Ja confessed that she was harshly criticized by ‘Our Blues’ writer Noh Hee Kyung.

She started by sharing, “Everyone was busy so we weren’t even able to have a reading session before we arrived at the film location (in Jeju Island). On that day, a few of us gathered at the hotel lounge and had a reading. After we finished, I came back to my room and got a phone call (from writer Noh Hee Kyung).” 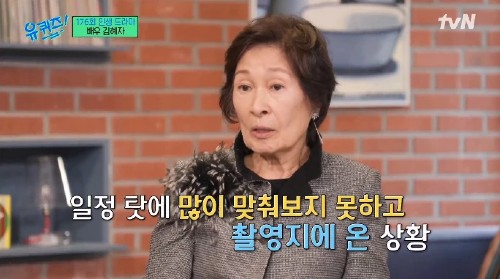 Kim Hye Ja continued, “She told me, ‘Seonsaengnim, how can you act so loveable for the role of that mother? Then who would cast you again?’ So I thought ‘Is she crazy?’ And I was baffled.”

But she continued to say, “I was so baffled but she was right. Her words helped throughout the filming.” Kim Hye Ja explained, “That woman character that I took on, she’s really unlucky. But I think I acted the way I normally do. So I think writer Noh Hee Kyung purposely spoke harshly to me.”

The actress added that she personally thanked writer Noh Hee Kyung after the filming. Kim Hye Ja explained that, but rather Noh Hee Kyung thanked her for her warm acting. She elaborated, “(Writer Noh Hee Kyung said) ‘Even if I was harsh to you, you couldn’t help your warm nature. It’s because of your warm character that she (the role) was able to receive sympathy. If you acted really mean as I directed, it wouldn’t have worked.”

Yoo Jae Suk shared how shocked he was and commented, “You seem to get scolded a lot, which is unexpected.” Kim Hye Ja responded, “I did get scolded. If I don’t get scolded, then that’s how habits are formed. So I am very thankful to writer Noh Hee Kyung.”