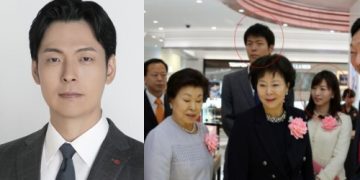 Shin Yoo-yeol (37 years old) is currently Vice President of Lotte Chemical. Recently, this eldest son of Lotte Group Chairman Shin Dong-bin attracted the attention of the business world when he often accompanied his father in important Lotte events. Some analysts see Lotte’s recent moves as a signal that he is speeding up efforts to train his eldest son to be the next leader, inheriting control of the family’s business empire. ethnicity.

On January 12, Yoo-yeol and his father went to the Value Creation Meeting (VCM) between Lotte Chairman and CEOs of the group’s subsidiaries at Lotte World Tower in Seoul. This is the first time he accompanied the Chairman to VCM. Before that, he had a meeting with senior leaders of the group last year and accompanied his father on a business trip to Vietnam.

As the son of one of the richest billionaires in Korea, Yoo-yeol has Japanese nationality. He is also known by his Japanese name Satoshi Shigemitsu. During his visit to the world’s most influential technology event, Yoo-yeol met a number of Korean reporters. However, he did not answer reporters’ questions, raising doubts about the Lotte heir’s Korean proficiency.

Yoo-yeol was born in 1986, graduated from a university in Japan and holds an MBA from Columbia University (USA). Before joining Lotte Chemical, he lived mainly in Japan and worked for Nomura Securities, Lotte Japan. Last year, during a business report meeting, Yoo-yeol used English to present.

Many experts believe that Yoo-yeol is rushing to learn Korean to take over the family business empire, avoiding the chaotic inheritance situation like his father’s generation. In 2015, a civil war in the Shin family broke out between the sons of Lotte founder Shin Kyuk-ho, Shin Dong-joo and Shin Dong-bin. Shin Dong-bin gained control of the 5th largest conglomerate in Korea but was unpopular with the Korean public because his Korean was worse than his brother Shin Dong-joo.

After the Lotte heir becomes a Korean citizen, he plans to increase his stake in Lotte’s subsidiaries in Korea. Currently, Lotte is still cautious about rumors about a successor. Lotte Chemical CEO recently said that the chairman’s eldest son will be tasked with finding cooperation with Japanese companies with advanced technical skills. Yoo-yeol is currently in charge of the materials business at Lotte Chemical in Tokyo.

Son Nam (According to Korea Times)