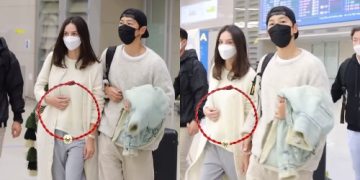 Following the official announcement that Song Joong Ki is in a relationship on December 26th, an anonymous user’s comment saying someone he knew saw the couple at an OBGYN’s office circulated online.

The original post was published on December 22nd, and it says the couple will soon tie the knot. It also says his girlfriend is Italian. Under the post, a comment says someone he knew saw the couple at an OBGYN’s office because the actress was pregnant.

Regarding the pregnancy and marriage rumors, Song Joong Ki’s agency said they cannot verify the actor’s private life and have nothing to comment on.

Meanwhile, it was previously reported that Song Joong Ki has been open about him being in a relationship as he introduced his girlfriend to the staff members at the media conference held on the 7th in Singapore.