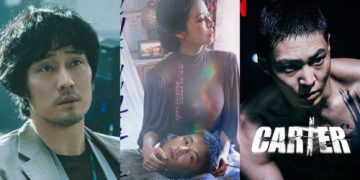 The film ‘Serve The People’, directed by Jang Chul Soo, was selected as ‘The Worst Film of 2022’ with 18 votes. Some reporters commented, “Too many sexual scenes without purpose”, “Yeon Woo Jin’s sacrifice was for naught”, “This film should never be revealed to society again”.

2. Carter
The Netflix-original film ‘Carter’ received 9 votes to earn 2nd place, the film was reviewed as too bad, the cast acted stiff.

3. Alienoid
‘Alienoid’ received 7 votes for 3rd place. The poverty of the plot combined with the disappointing performance of the male lead So Ji Sub makes Alienoid considered a complete failure.