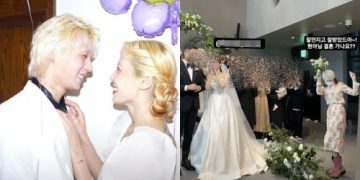 HyunA and DAWN have separated.

“We broke up.
We decided to remain as good friends and colleagues from now on.
Thank you always for your support and for looking over us fondly.”

HyunA and DAWN started dating in 2016 and made their relationship public in 2018.
Meanwhile, many fans immediately expressed their disappointment and regret at the sudden breakup of the couple HyunA and DAWN.
Only a few months ago both HyunA and DAWN had mentioned their plans to get married in the near future, but now all has come to an end.
Across K-pop forums and especially Pann, many netizens believe that the disagreement in marriage plans makes the two unable to find common ground, causing them to choose to leave each other.
Many fans hope that HyunA and DAWN’s separation is only temporary.