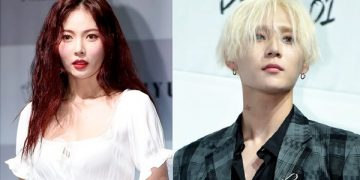 HyunA and Dawn have broken up.

On November 30, HyunA made the announcement that the couple, who’ve been dating since 2016, have officially gone their separate ways. She posted on Instagram, “We broke up. We decided to remain as good friends and colleagues. Thank you for your support and for looking over us friendly.”

In other news, HyunA and Dawn both left P Nation this past August. The couple were previously rumored to be engaged after posting engagement-related images on social media.