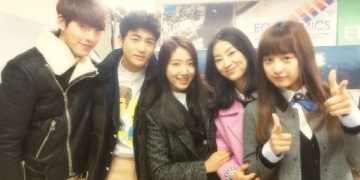 Park Shin Hye and Park Hyung Sik may be starring in a new drama together!

On November 30, TenAsia reported that Park Shin Hye and Park Hyung Sik will be starring as the leads of the new drama “Doctor Slump” (literal title).

In addition, Park Shin Hye and Park Hyung Sik worked together on “The Heirs”.
“Doctor Slump” is about doctors who are in a slump as they try to resuscitate their lives. The rom-com captures the love and growth of two characters who live in a rooftop house after quitting their jobs as doctors. Park Shin Hye is in talks to play Nam Ha Neul while Park Hyung Sik has been offered the role of Yeo Jung Woo.

At the beginning of this year, Park Shin Hye got married to Choi Tae Joon, and the two celebrities became parents after they welcomed their first child to their family. If Park Shin Hye accepts the role, this will be her first medical drama since her 2016 performance in the hit drama “Doctors” and her first project since becoming a mom.

Since his debut as a member of ZE:A in 2010, Park Hyung Sik has also impressed in numerous projects including “What Happens to My Family?,” “Hwarang,” “Strong Woman Do Bong Soon,” “Happiness,” and more. Previously, Park Hyung Sik starred with Park Shin Hye in the popular 2013 drama “Heirs.”

“Doctor Slump” will reportedly begin filming next year after casting is completed, and the broadcasting details have yet to be confirmed.