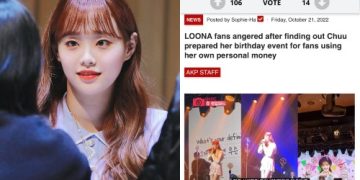 LOONA fans and staff protect Chuu, fight back at the agency after she was removed from LOONA!
staff defend Chuu against BlockBerry Creative’s allegations
“Power abuse, that’s really funny…”

As of today, Chuu is no longer a member of LOONA. In an official statement, shared on the group’s fancafe, BlockBerry Creative announced that Chuu has been removed from LOONA due to her behavior towards the agency’s staff members.

Chuu with fans.
Based on the LOONA members’ love for the team and consideration for their fans, they tried to show their feelings by putting their best efforts into their performances and content, not talk about what is true or false.

The context in baby words :

Bbc no pay loona since debut

Chuu sue and speak up

However, recently we were told of Chuu’s verbal abuse and power-trip tendencies towards our staff. After an investigation, we discovered the truth. Our agency staff are apologizing and comforting the affected staff members. We have decided to take responsibility for this and remove Chuu from LOONA.

adding that little “The LOONA members have never worked solely for their personal profit or gain” to try and shade chuu because god forbid somebody wants to actually receive the money they work for instead of just being used as a cash cow for a company that doesn’t care about u https://t.co/KN3OTYpzjY

BlockBerry Creative stated that LOONA and the agency will both, “go back to our roots and work as hard so an incident like this never happens again.” Some fans, however, do not believe the “incident” occurred in the first place.

Instead, they claim BlockBerry Creative is trying to silence Chuu and cover up their alleged mistreatment of her.

Chuu Can Do It writer Instagram Story:
"Power abuse, that's really funny 🙃
Even when it was tiring for Jiwoo she was someone who worried in case the staff wouldn't get paid
Once I got frustrated and said hey Jiwoo worry about yourself first!"
(1/2) pic.twitter.com/ymDqiV0OcL

Fans aren’t the only ones coming to Chuu’s defense. The writer of Chuu Can Do It (also known as Chuu Protect the Earth) contradicted BlockBerry Creative’s claims about Chuu’s attitude towards staff.

A photographer who has worked with LOONA several times also painted a very different picture of the star, recalling fond memories of Chuu on set.

Instagram Story from a photographer who has worked with #LOONA:
I always remember, every time we had a photoshoot, how Chuu would give me a warm hug and energize me, and the warmth of the LOONA members.🤍
I'm always rooting for you with love! 💪🫶 pic.twitter.com/5DiNopGdQb