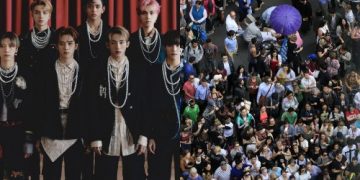 Following the news of a bomb threat letter targeting the venue, NCT 127 held the first of their two-day concert in Indonesia; it was reported that the concert that took place on November 4 was canceled midway due to another issue.

Local media in Indonesia reported on November 4 that a bomb threat letter targeting the concert hall in Jakarta, where NCT 127 is holding their concert, was found circulating online. But the bomb was not found when the local police searched the concert hall with detection dogs, and the concert was held according to schedule. The Jakarta Metro Police stated they will be increasing security on the day of the concert in preparation.

However, on the day of performances on November 4, the concert had to be stopped midway due to a group of fans pushing and fainting due to the pressure of the crowd.

The issue arose in the standing section of the concert, where fans were standing rather than being given specific seats. Therefore, a group of fans began pushing forward, causing other fans to be crushed. This led to around 30 people fainting, causing the concert to be stopped halfway.

Korean netizens also raised their voices in concern, saying, “This is why giving standing seats is bad,” “I heard 30 people were taken out because they fainted, This is so scary. I’m worried about the people there. I’m worried about the members. It hasn’t been long since the Itaewon tragedy…I wish they don’t have a standing area from now on,” “At least they stopped the concert so people won’t get too hurt,” “On top of that, there was a bomb threat,” and “Hope everyone is safe.”