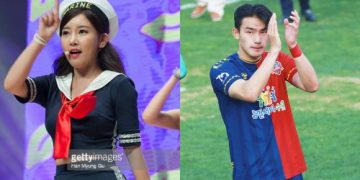 Although the wedding ceremony was postponed, the two completed the marriage registration and were recognized as legally husband and wife.

However, recently, Jo Yu Min was named in the list of players participating in the FIFA Qatar World Cup 2022 of the Korean national team. Therefore, both decided to postpone the wedding so that the male player could focus on preparing for the tournament.

According to JTBC Entertainment, So Yeon expressed her joy when she heard that her husband was selected to attend the World Cup.

During the hard training process, Jo Yu Min was actively encouraged and supported by So Yeon, both physically and mentally. “So Yeon told me to go to the national team and do well,” the male player revealed.

In January, So Yeon and Jo Yu Min announced their marriage after 3 years of secret dating. Since going public, the couple has often shared photos showing their intimate feelings on social networks and received admiration and praise from the audience.

So Yeon was born in 1987. In 2009, she debuted in the girl group T-ara. The group quickly became famous thanks to hits like Bo Peep Bo Peep, Roly Poly, Lies, Why Are You Being Like This… In 2017, Soyeon left the group and started working as a solo singer and actress.

Jo Yu Min is 9 years younger than So Yeon. He plays for the Daejeon Hana Citizen team. In 2018, he and the Korean U23 team won the ASIAD gold medal.