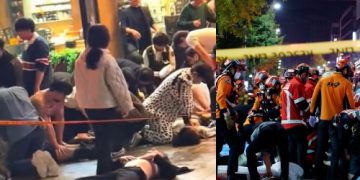 Hundreds of people have been critically injured in Itaewon.

On the night of October 29 in Seoul, more than 100,000 people gathered in the neighborhood of Itaewon to celebrate the Halloween weekend. Due to a suspected crowd surge, over a hundredpeople were reported to have suffered from cardiac arrest. Footage of injured individuals receiving CPR circulated around social media.

According to the emergency fire officials, the accident occurred around 10:15 PM KST, just before the police received reports that about 20 people have fainted due to a crowd surge.

Authorities are still looking into the exact origins and the cause of this accident. Stay tuned for updates.

Update – The number of fatalities from the Itaewon tragedy is rising.

Yongsan Fire Department in Seoul confirmed that the death toll has risen up to 149 and at least 150 have been injured. Over a hundred victims are hospitalized across the city and 45 of them have been sent to the Wonhyoro Indoor Gymnasium in Yonsang District.

Furthermore, 19 are reported to be severely injured with 57 suffering from minor injuries. Officials are currently urging the speedy identification of the victims to alert their families. Most victims are reported to be in their twenties.

The city of Seoul has also increased the number of buses and subways to provide emergency transportation at this time. Due to the high number of police and firefighters dispatched to this scene, it has been highly advised across social media for the public to safely return home as soon as possible.