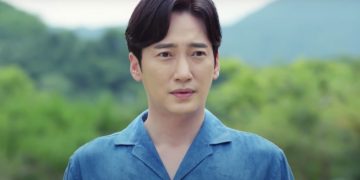 Actor Lee Sang Bo was arrested by the police after it was reported that he was walking on the street with an unusual expression. He is currently being treated at the hospital.
On September 12, Seoul Shinmun reported that the identity of the Korean actor in his 40s who was arrested by the police for using drugs is Lee Sang Bo. This information was confirmed after SBS revealed the CCTV footage of the scene.

Earlier, the Korean media reported that at around 2 pm on September 10 (local time), an unnamed actor (referred to as A) was arrested at his home in Nonhyeon-dong, Gangnam, Seoul for having a positive test result for stimulants.

When police arrived at the scene, A was unable to speak or walk normally. There were signs that he had vomited.

After conducting a search of the actor’s home, the authorities found dozens of pills with unknown ingredients. The police plan to interrogate A after he completes his treatment at the hospital.

After the information was revealed, many stars in their 40s were accused of being A, of which the two actors who were most influenced were Park Hae Jin and Lee Moo Saeng. However, the two quickly denied the rumors and announced to sue every individual who intentionally spread false information.

In addition, the additional information revealed by Dispatch caused the public to turn to suspect Lee Sang Bo. The actor’s social media account is now private.

Lee Sang Bo appeared in about 10 works. He mainly takes on minor, minor roles. He began to be noticed by the public after the movie “Miss Monte-Cristo” aired in 2021.