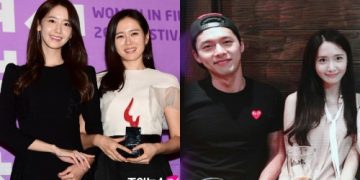 Girls’ Generation Yoona (32 years old) said, “I wonder how Son Ye-jin will see the romance between me and Hyun Bin.”
In the action movie “Confidential Assignment 2: International” (hereinafter referred to as “Confidential Assignment 2”, directed by Lee Seok-hoon, produced by JK Film), Im Yoon-ah played Park Min-young, sister-in-law of Kang Jin-tae. She conducted a video interview with Sports Chosun on the morning of Sep 6th. She expressed her affection and pride for Hyun Bin and Yoo Hae-jin, who worked together with her again after 5 years, as well as new member Daniel Henney.

Yoona said, “It was so comfortable to see Hyun Bin and Yoo Hae-jin after a long time since ‘Confidential Assignment’. I think I was able to enjoy the filming of ‘Confidential Assignment 2’ more than the previous part. I felt secure just with their existence. They were very comfortable and friendly even though they were seniors. In particular, I had many scenes with brother-in-law Jin-tae (Yoo Hae-jin). I usually call Yoo Hae-jin brother-in-law even in normal circumstances.”

She also mentioned her romance with Hyun Bin. Yoona has been building a friendship with Hyun Bin’s wife Son Ye-jin. In this regard, she confessed, “I think it doesn’t matter because it’s my character’s one-sided romance towards Cheol-ryung (Hyun Bin). I don’t think Son Ye-jin will feel burdened. I may have to ask Son Ye-jin later. My feelings for ‘Confidential Assignment 2’ remain unchanged. The work and working environment were the best.”