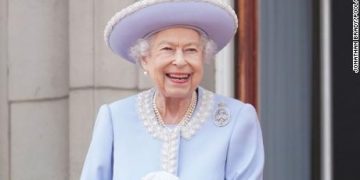 “The Queen passed away peacefully at Balmoral Palace this afternoon. The King and Queen will stay at Balmoral tonight and return to London tomorrow,” Buckingham Palace announced at around 6:30 p.m. on September 8.

Prince Charles, 73, who was appointed heir to the throne at the age of three, is now King Charles III.

The Queen died peacefully at Balmoral this afternoon.

The King and The Queen Consort will remain at Balmoral this evening and will return to London tomorrow. pic.twitter.com/VfxpXro22W

Earlier on September 8, Buckingham Palace said doctors were concerned about the health of Queen Elizabeth II and recommended that the 96-year-old Queen be under medical supervision. “The Queen is fine and is at Balmoral Castle,” the statement said, referring to the Royal Family’s castle in Scotland.

Members of the British Royal Family rushed to Scotland to meet the Queen. British Prime Minister Liz Truss and a series of politicians around the world have voiced their interest in the Queen.

Queen Elizabeth II was forced to cancel an online meeting with senior ministers in the British government on September 9, after doctors advised her to rest. The day before, she appeared in pictures with new British Conservative leader Liz Truss at Balmoral Castle, who became prime minister to replace Boris Johnson.

Queen Elizabeth was born on April 21, 1926 and is the oldest child in a family of two sisters. At the age of 10, little Elizabeth became the heir to the throne, after her uncle King Edward VIII ceded the throne to his younger brother King George VI on December 11, 1936.

On the fateful day of February 2, 1952, 25-year-old Princess Elizabeth was visiting Kenya when her husband informed her that King George VI had died in his sleep. When she returned to England, she was personally picked up at the airport by Prime Minister Winston Churchill. However, her official coronation took place just over a year later, on June 2, 1953.

During her more than 70 years of reign, England had 15 prime ministers and the United States had 14 presidents. She is the monarch of 15 Commonwealth kingdoms, including Great Britain, Australia, Canada, New Zealand, Jamaica and others.