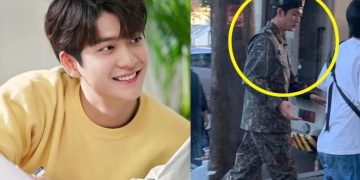 Actor Kang Tae Oh wore a military uniform and immediately became a hot topic
On August 17th, a photo of Kang Tae Oh, who became popular after appearing in the ENA Drama “Extraordinary Attorney Woo”, was uploaded to an online community.

In the published photo, Kang Tae Oh was wearing a military uniform as he filmed a commercial film. The actor’s muscular figure was greatly complemented in said uniform, and the military beret added to his charm. Although the photo was taken from a distance, Kang Tae Oh’s god-like features did not fail to draw attention. 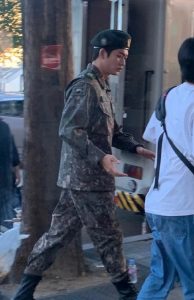 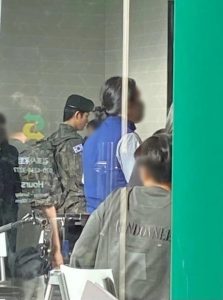 Kang Tae Oh assumes the role of male lead Lee Jun Ho in “Extraordinary Attorney Woo”. In the series, the female lead broke up with him, not knowing how he felt, to which Kang Tae Oh responded, “I’m disappointed”, and swayed hearts with his expression.

Afterwards, it was reported that a sandwich brand with a name similar to this line has selected Kang Tae Oh as its model, and used a soldier concept.

As Kang Tae Oh is about to enlist in the military, his appearance in the soldier uniform great surprised people.

Below are some comments from netizens:
I was so surprised to see him in a military uniform all of a sudden.
This is so sudden
That sandwich brand took their chance really quick
The military uniform looks so good on him
Have a safe time in the military