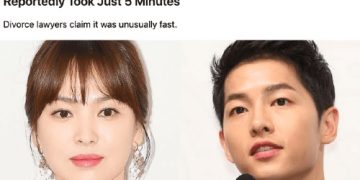 According to Koreaboo, the lawyers said that Song Joong Ki and Song Hye Kyo’s divorce settlement was unusually fast.

In July 2019, the broken marriage of Song Hye Kyo and Song Joong Ki was the hottest topic in Korean media in particular and Asia in general. Although the couple has been divorced for more than 3 years, the aftermath of this divorce still makes the public curious.

The Koreaboo reported that the lawyers commented that “the process is unusually faster than people think”. Although usually the divorce proceedings of top stars often go much faster than the average person because they have few issues to discuss and do not want to be the center of attention in the public eye.

Industry insiders insist both sides want to complete the procedure as soon as possible. They also revealed that the couple wanted to finish the procedure before the court officially adjourned in the last week of July. According to Korean law, unless it is an important case otherwise the court will not. The case will not be processed during the break. Although the divorce of Song Hye Kyo and Song Joong Ki is a widely discussed topic, for Korean law it is not an important case. Therefore, Song Hye Kyo and Song Joong Ki both want the procedure to happen quickly, otherwise everything will be delayed and prolonged.

Song Hye Kyo and Song Joong Ki fell in love after working together in the movie Descendants of the Sun in 2016. The two announced their love in July 2017 and got married in October of the same year. However, the married life of the star couple lasted only 20 months.

At that time, the public continuously criticized the actress and defended Song Joong Ki. The actor’s lawyer confirmed that the divorce happened due to Song Hye Kyo’s fault. However, Song Hye Kyo’s supporters believe that Song Joong Ki has something to hide, so he has to rush to divorce at the time his movie is premiering. Previously, it was reported that the actor had been living with rumored lover Kim Ok Bin for a long time, making Song Hye Kyo angry. After more than a year, the real cause of Song – Song’s divorce has not been announced. The two stars avoid mentioning each other, only mentioning their current life when asked about “ex-lovers”.