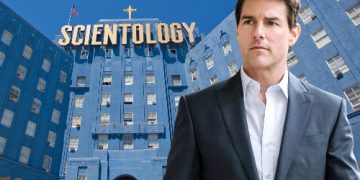 Aside from his movie career, Tom Cruise is known for his membership in the Church of Scientology — a controversial institution among many. In a bombshell interview, a former Scientologist offered some insight into the alleged practices and principles of the church, including an idea that allegedly makes Cruise believe his daughter, Suri Cruise, isn’t technically his.

How Tom Cruise got into Scientology
Founded by author L. Ron Hubbard in the early 50s, Scientology is the belief that humans are spiritual beings who “[live] through countless lifetimes,” per The Guardian. Cruise’s introduction to it came in the ’80s through his first wife, Mimi Rogers, whose father, Phil Spickler, used to be a high-ranking member of the church, according to Radar Online.

The report goes on to detail Cruise’s involvement in the church and his belief that its teachings helped him overcome dyslexia. “I knew some of the people who kid-gloved him into becoming a member,” former Scientologist Nancy Many told Radar Online. “Everything was orchestrated and orientated. Tom has a problem reading so they don’t have him doing the course on his own and paired him up one-on-one.”

His marriage to Rogers eventually ended, but his relationship with Scientology continued
Cruise split from Rogers in 1990 and married Nicole Kidman the same year. The Moulin Rouge! actor would tell Vanity Fair that she explored Scientology during their marriage, which produced two children who were adopted. “But I’m not a Scientologist,” she added.

The two divorced in 2001 amid rumors that members of the church had allegedly influenced the breakup, but, as Newsweek points out, neither of them ever addressed the reason they split.

By April 2005, Cruise had moved on with Katie Holmes. After a five-month-long engagement, the actors married in November 2006. They welcomed one child, daughter Suri in April 2006, before splitting in 2012. As was the case with Kidman, it was reported that Scientology motivated the split.

The Daily Beast claimed Holmes filed for divorce after discovering Cruise allegedly intended to enroll Suri in a Scientology recruitment school. It was also said that there was a clause in their divorce settlement reportedly banning Cruise from involving their daughter in the church, which allegedly damaged his relationship with Suri, as they have not been publicly photographed together in nearly a decade.

In an interview with Radar Online, former Scientologist Sam Domingo said that Cruise “likely believes that his daughter, Suri, whom he shares with ex Katie Holmes, is nothing more than just a ‘being’ who he will see again in another lifetime.”

“The church has this idea that children, for example, are just thetans or spirits in the small body,” Domingo continued. “If a kid dies, it doesn’t really matter to them. You can get pregnant and you can have another one, and that spirit you lost can come back in a new body.”

Domingo added, “I’m sure if he could rescue Suri from the clutches of her mom he [would]. But you know what? He can get her in the next lifetime so it doesn’t really matter. She’s not really his daughter.”

After making similar comments in a past interview with Us Weekly, a spokesperson for the church pushed back on her statements. “Everything about your inquiry misrepresents the Church of Scientology, its practices, and the lifestyle of its ministry,” the representative said. As far as Cruise himself, it doesn’t appear that he’s ever addressed those claims.