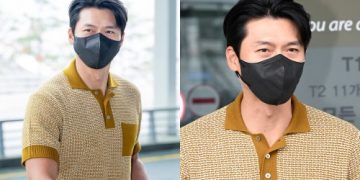 On July 24, Hyun Bin appeared at Incheon airport to fly to Milan, Italy to attend a fashion event. Immediately, a series of amateur photos at the airport became a hot topic, because this was Hyun Bin’s first overseas schedule after marrying Son Ye Jin and becoming a father.

Not ashamed to be the top actor in Korea, Hyun Bin impresses with his tall physique, model-like style, and handsome beauty despite wearing a tight mask.