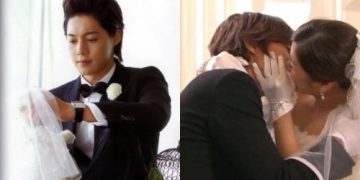 Singer and actor Kim Hyun Joong is going to welcome a child! On July 21, the ‘Boys Over Flowers’ star’s agency officially shared that Kim Hyun Joong’s wife is currently pregnant. The agency stated, “Kim Hyun Joong is presently cautiously waiting for a new life with gratitude and excitement.” The statement continued, “Since this news is to do with [the actor’s] private life, we politely ask you to refrain from excessive interest or speculation in consideration of the position of the [actor’s] wife who is a non-celebrity.” The actor has a child already with a previous partner.

The special thing about Kim Joong Hyun’s mysterious wife has also been revealed. He and his wife have known each other since 7th grade, and both have been in the same class for 2 years in a row.
His current wife is also the one who has been by his side during the most difficult time in both career and love.
The two dated for 3 years before getting married.
Congratulations to the newlyweds!