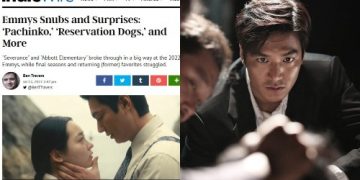 Previously, on July 12, the Academy of Television Arts & Sciences – the organization of the Emmy Awards announced the names nominated for prestigious awards that will appear at the awards ceremony this year. Immediately after the nominations were announced, Korean netizens reacted negatively to the fact that Apple TV’s Pachinko series with a touching plot tells an unforgettable chronicle between war and peace, love and separation, victory and judgment set in the context of three countries, Korea, Japan and the United States, have been excluded from most nominations of this awards ceremony, except for the Design Award Excellent main title design.

Pachinko has the appearance of famous stars such as actor Lee Min Ho – the leading star of the Hallyu wave, Oscar-winning actress Youn Yuh Jung and talented young actor Kim Min Ha, however the film still being “ignored” by Emmy. This caused the international media to voice their displeasure.

The news site INDIEWIRE said: “A huge fanbase online combined with positive reviews still failed to propel the Apple TV+ series into the Emmy Awards. It could be due to stiff competition or a lack of viewership overall, but it’s hard to believe that losing most nominations like that.” 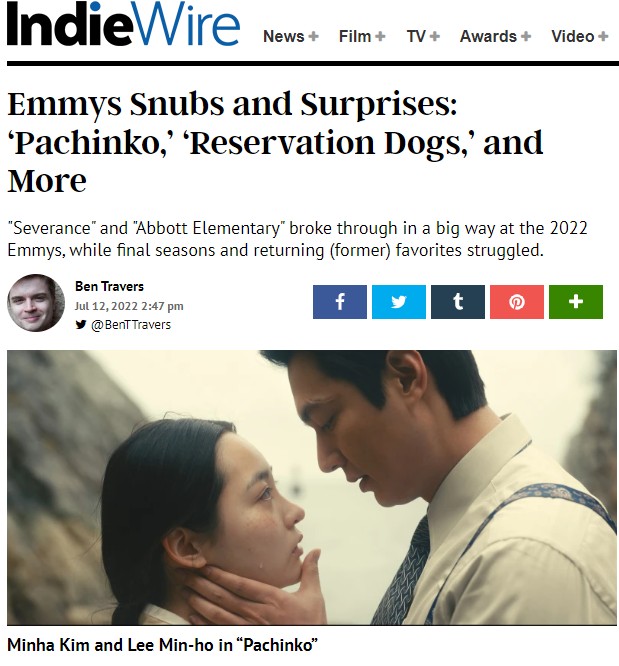 COLLIDER expressed regret that Kim Min Ha was not nominated, saying “. Kim Min Ha, who plays the teenage version of central character Sunja, subtly captures both the character’s weaknesses and strengths with ease, becoming the basis of the story. She created a complex character on her own, making every moment burst with emotion. Her scenes are so wonderful that they are forever etched into the memories of many viewers. Kim Min Ha should have received a nomination at the Emmy Awards. The underlying reason for the film’s rejection was the fact that the Emmys, like most awards in general, underestimated artwork spoken in a language other than English.” 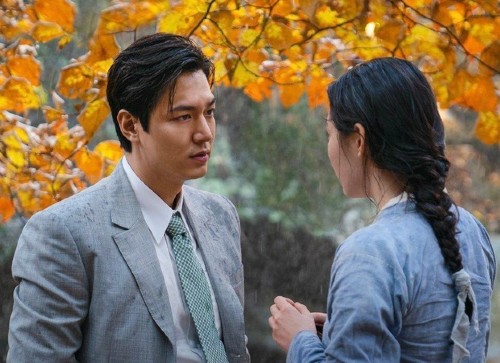 HuffPost mentioned that Kim Min Ha and Youn Yuh Hung were excluded from the list of nominations and set expectations for the next season of Pachinko: “Created by veteran screenwriter Soo Hugh, Pachinko should have been recognized. Because of its incredible scale, its stories deal with the aftermath of imperialism and intergenerational trauma. It has compelling content, beautiful visuals, and is chock full of emotional performances from a multi-generational international cast. It will be great when Kim Min Ha and Youn Yuh Jung are nominated for acting. Pachinko is already scheduled to produce the next season and we hope the Television Academy will correct this injustice in the years to come.”

Vulture explains why Pachinko didn’t appear at the Emmys: “Pachinko is a beautifully crafted family epic that holds the weight of history. The reality, however, is that it’s all been overlooked – from its cinematography to its flawless acting and script. This is a pretty negative reflection of Emmy.”

“It’s honestly one of the best shows I’ve seen not only this year but also in my career as a TV critic,” Decider said. Cinematography, directing, writing and acting are all top notch. It’s a really compelling show and definitely deserves more awards.”

The Hollywood Reporter points out, “Pachinko’s opening season deserves the nominations they received, but the rest of the show deserves more nominations that they didn’t get.”

Of course, the awards ceremony cannot be all the criteria to determine the good or bad of a movie. It is a pity that a film as attractive as Pachinko is not treated properly. Therefore, controversy about discrimination is inevitable.

Pachinko released the final episode of season 1 on April 29, and confirmed that season 2 will soon be produced in the near future.