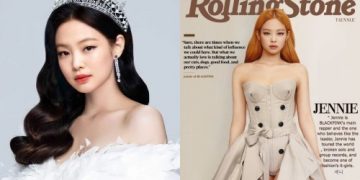 Twitter users put the hashtag #jennieleaveblackpink on top after accusing YG of not taking action to protect Jennie from recent rumors.

In particular, a Rolling Stone reporter shared about his experience working with Jennie and was set out to let the public know more about this female idol.

Jennie is often said to have a cold image and a “bored expression”. However, if you are a fan, you’d know that the female idol is actually warm and cute, despite her chic cat-like appearance. Still, the public generally associate Jennie with an “ice princess”

Jennie looks like an ice princess on stage
While most fans adopt the “ice princess” nickname proudly and use it to refer to Jennie’s chicness and classiness, anti-fans would take advantage of a harmless nickname and make it as though Jennie is a rude and unpassionate idol. In the face of this, Haeryun Kang, a Rolling Stone reporter, was set out to prove them wrong.

In particular, the reporter wrote on Instagram that: “Most interesting discovery about Jennie! She’s very cute! She told me in detail about the time she went to study in New Zealand – a time she described as “one of the happiest memories”. She also discussed the wrong notions the media and netizens have about her, she’s really not that cold. “

Jennie is actually shy and cute in real life
True to Haryun Kang’s words, Jennie’s real personality is pretty shy, yet she never fails to light up the atmosphere whenever she goes. Her cute smile is also a huge bonus to her kind personality.

Alongside from Haryun Kang’s Instagram post, the column published on Rolling Stone Korea also favored Jennie, and described her as “the most important member”. This is a complete contrast towards their actions towards Jisoo and Lisa.

Jennie’s excerpt from the controversial Rolling Stone column is as follows:

“Among all the members, the status of Jennie, who exerts the greatest influence over the group’s powerful image and bold attitude, cannot be emphasized enough. Jennie is the symbol of K-Pop’s success and the glamor that accompanies it. Failure has had no place in her career since her debut. She is always at the very center of people’s interest and first received attention through her solo album “Solo.” There is ample evidence to support the success of Jennie. With her springy mid-and-low tone voice, which contrasts with her cute but captivating appearance, Jennie took on raps as her main talent but also covered as a vocalist, playing a crucial role in establishing the identity of BLACKPINK. Jennie is certainly the most important member forming the core identity of the group, portraying an urban, cool sound and glamorous and posh image.“