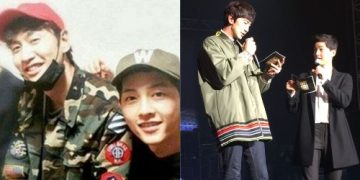 Song Joong Ki and this actor created one of the most admirable friendships in Korea.
Amid the turbulent Korean showbiz, it’s hard to form and maintain a meaningful friendship. Still, there are Korean actors who have stuck close together for over a decade.

In contrast to many who like to keep their friendship quiet, some others like to broadcast their relationship for the world to see, and Song Joong Ki and Lee Kwang Soo is one such iconic dupe. Although Song Joong Ki has a lot of famous friends, from Yoo Ah In, Park bo Gum, Jo In Sung, to Kim Woo Bin, Lee Kwang Soo is still “the most important friend” in his life. 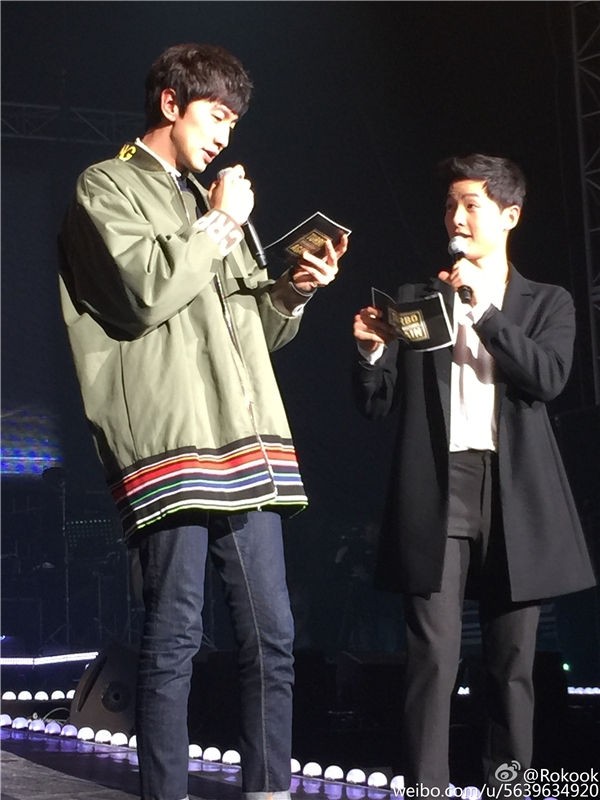 Both born in 1985, Song Joong Ki and Lee Kwang Soo have become big names in the Korean entertainment industry. The two first met as cast members of the variety show “Running Man”, then both inexperienced and new faces in the industry. Despite being same-aged friends, Song Joong Ki and Lee Kwang Soo were complete opposites of each other, from height, visuals, to personality, to the point they admitted that they did not want to take photos together due to the stark height difference.

After 8 months, Song Joong Ki decided to leave “Running Man” to focus on his acting career. Upon hearing the news, Lee Kwang Soo couldn’t help but tear up and got emotional, and their “separation” on the show as well as their tight friend even become a hot topic with the most number of searches on the Korean web portal Naver. 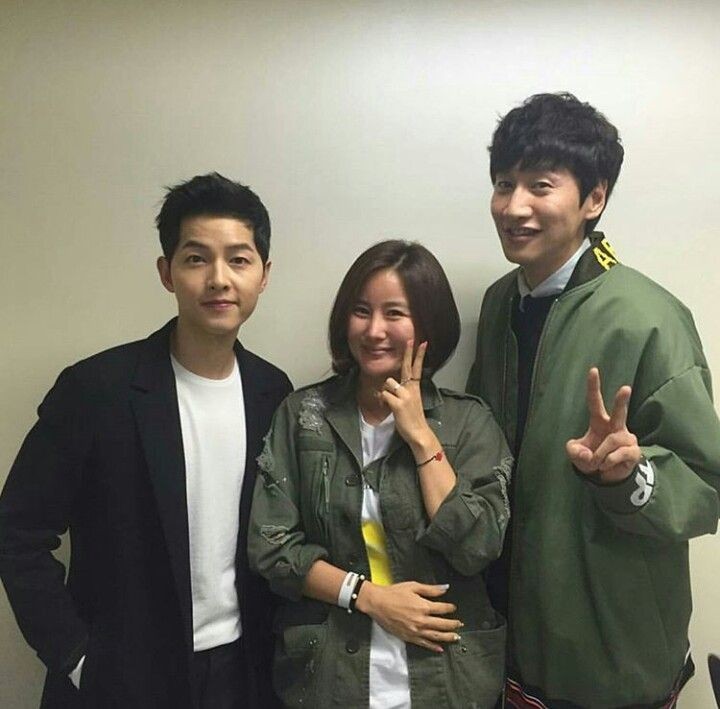 In 2013, before Song Joong Ki enlisted to perform his military service, the duo drank together and shared all sorts of feelings and stories with each other. Lee Kwang Soo once recalled the day tearfully, saying: “That night, we kept crying while mentioning our memories together and the adversities we have been through. It was night we’d remember for the rest of our life.”

It is no accident that Song Joong Ki and Lee Kwang Soo’s friendship is regarded by Korean media as the most endearing in Kbiz. Lee Kwang Soo, according to Song Joong Ki, is not just a friend but also a family member who supports him whenever he needs it, listens to him without fail and shares his problems with him. 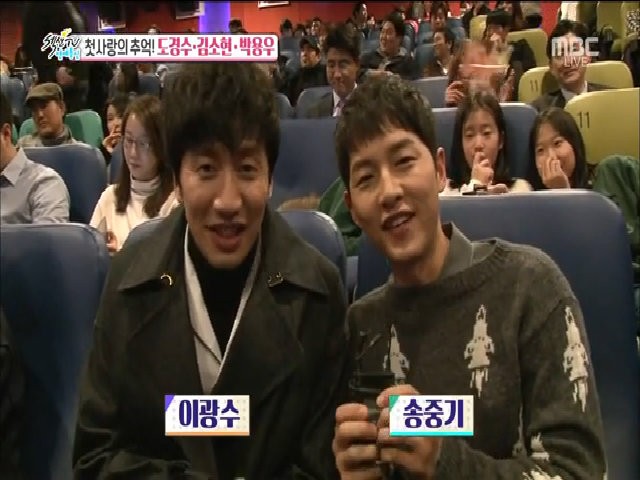 Right after being discharged from the army, the first thing Song Joong Ki did was go to the filming set of Running Man to visit his best friend. The two actors then, along with Jo In Sung, planned to travel to Thailand to celebrate Song Joong Ki’s excellent completion of his military service. They are such friends who think of each other first and spend time together at the most important milestones of their lives.

During Song Joong Ki’s enlistment, Lee Kwang Soo often visited the barracks to show his support for him
There are many times, the two stars also support each other by accepting cameo roles in each other’s projects. Lee Kwang Soo once caused a stir when appearing in episode 1 of “Descendants of the Sun” to support his friend, and Song Joong Ki also appeared as a cameo in “Calling My Heart”, in which his best friend played the main character.

The two often support each other’s dramas by taking on cameo roles
More than a soulmate, more than a brother in the family

Having been close friends for more than a decade, the two actors have become family to each other. Song Joong Ki once revealed, “Lee Kwang Soo is the only celebrity that I used to invite to my house. My mother will cook noodles for him every time he visits.”

The friendship of Song Joong Ki and Lee Kwang Soo is considered the most beautiful friendship in Kbiz.

During the time when Song Joong Ki enlisted in the army, Lee Kwang Soo not only regularly visited the barracks, he also took care of his family on behalf of his close friends. The actor replaced Song Joong Ki as the second son in the Song family and prepared everything for his brother’s wedding. Lee Kwang Soo also enthusiastically welcomed the guests coming to the wedding and even took photos with them. Song Joong Ki could not hold back his tears when watching the video recording the entire wedding scene, witnessing and clearly feeling the sincerity of Lee Kwang Soo for him and his family. On the important occasion of Lee Kwang Soo’s family, Song Joong Ki is always there next to his best friend and helps him out with all of his heart.

Lee Kwang Soo and Song Joong Ki were both present on important days for each other’s families.

Freely showing their affection towards each other, affirming to be the other’s soulmate

The two male actors born in 1985 have repeatedly expressed their affection towards each other in public. In 2016, during a filming of “Descendants of the Sun” in Greece, Song Joong Ki wrote his name and his best friend’s name with a heart on a white stone. It is this that has caused the media to question the real relationship of the two actors, while the fans are excited to call the two actors the “true love” of each other. 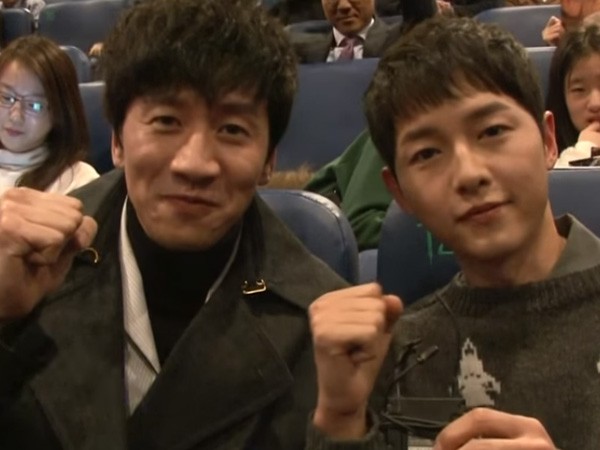 “Song Joong Ki (heart) Lee Kwang Soo (Prince of Asia) – October 14, 2015”, Song Joong Ki wrote on a white stone in Greece
Or during a fan meeting in Thailand, Park Bo Gum once confessed to his close senior that if he was a girl, he would want to date Song Joong Ki. Song Joong Ki later rejected him, “Sorry, I already have Kwang Soo.” 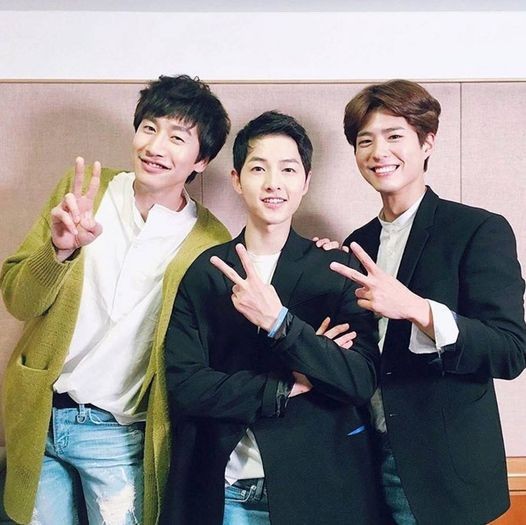