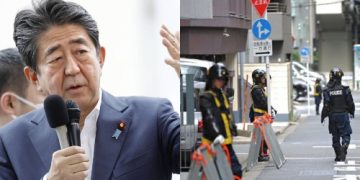 According to NHK, the incident happened around 11:30 a.m. Mr. Abe is speaking in the street.

Former Prime Minister Abe was injured and bleeding at the event, according to local media.

A male suspect has been arrested. Japanese police said the suspect approached former Prime Minister Abe from behind and shot him with a shotgun.

The suspect is said to have shot the former Japanese prime minister twice and only stood there after Mr. Abe fell to the ground. The suspect did not attempt to flee.

Public broadcaster NHK quoted a police source as saying that the man appeared to be 40 years old and that a gun had been confiscated.

In this June 22 photo, Abe interacts with supporters as he participates in the election campaign of LDP member Kentaro Asahi ahead of the July 10 upper house elections. Photo: AFP.
An NHK reporter at the scene said two loud explosions were heard in quick succession in the middle of Abe’s speech.

According to Kyodo, former Prime Minister Abe lost consciousness and appeared to have suffered a respiratory arrest.

NHK quoted information from the ruling LDP party as saying that Mr. Abe had traveled to Nara to give a speech in the street in support of candidates in Japan’s upper house elections. After his speech in Nara, he is scheduled to arrive in Saitama on the evening of July 8.