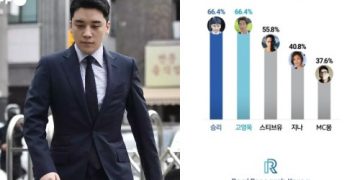 Recently, Real Research Korea did a survey in which it asked Korean citizens to vote on Korean celebrities who should not be allowed to make a return to the entertainment industry ever.

The voting was done through the Real Research app, and a total of 3,507 Korean adults took part in the survey from May 9 to May 16.

Seungri is notorious for being involved in the biggest scandal in South Korea – the ‘Burning Sun’ scandal. Also known as the ‘Burning Sun Gate,’ it was an entertainment and sex scandal that took place in Seoul back in 2019. The scandal involved a handful of Korean celebrities and police officials surrounding the allegations of sex crimes such as rape and unconsented sex videos taken at the Burning Sun club as Seungri was one of the club’s directors.

Singer Go Young Wook also brought shock to Korean citizens when he was convicted of assaulting three minors. In 2013, he was sentenced to 2 years and six months of prison time for sexually harassing and assaulting three underage women, as well as three years of wearing an ankle monitor and five years of his file staying public. He was released from prison in July 2015. In 2020, Go Young Wook tried to make a comeback to social media by making an Instagram account but soon was banned due to the Instagram guidelines that prohibit convicted sex offenders.

Steve Yoo, or Yoo Seung Jun, was one of the biggest celebrities in the late 90s and early 2000s. He was the most popular male solo singer of that time but was banned from entering South Korea after he obtained U.S. citizenship after claiming that he will enlist in the Korean mandatory military service. He was accused of evading the mandatory service because he repeatedly claimed on television that he will fulfill his national duty. However, right before he was to enlist, Yoo Seung Jun became a naturalized U.S. citizen causing the South Korean government to deport him and permanently ban him from entering the country because of his act of desertion.

Back in 2016, singer G.Na was involved in a prostitution scandal in which she was accused of having sexual intercourse with an unidentified businessman on a few accounts in the United States and was paid around 35 million KRW (~$30,000 USD). G.Na was later sentenced to a fine after admitting the charges.

MC Mong also was involved in a military scandal in which he was accused of evading mandatory military service by extracting multiple healthy teeth to gain exemption. He was accused of delaying his enlistment for seven years and then pulling out his teeth to be exempt. He was given suspended sentencing of six months in prison after being found guilty of dodging conscription.