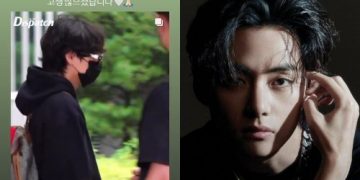 As BTS’s V returned from Paris, France, netizens are criticizing his attitude.
On June 28th, V arrived in Korea through the Gimpo Business Aviation Center after attending CELINE’s fashion show in Paris, France. He was supposed to land at 8:55 a.m. KST, but showed up past 12:20 p.m. KST because his flight was delayed.

Min Yoo, Head of VIP celebrities at Celine posted a clip of Taehyung returning to South Korea on her instagram story.

Caption;
You're really the best
You did a great job🤍🙏🏻#BTSV #방탄소년단뷔

V appeared in a black hoodie, yellow shorts, and comfortable slippers. He got into the car immediately as soon as the door opened, without greeting reporters and fans who were waiting for him.

After that, V said on the fan community Weverse, “I’ve arrived” and apologized to the reporters and fans for getting in the car right away.

Although V has apologized, Korean netizens continue to criticize his attitude, leaving comments such as “I feel embarrassed for him”, “Is it so hard to say hello?”, and “The difference in their attitudes is so obvious”.

On the other hand, there were also netizens who defended V, saying, “Are you swearing at him because you feel inferior?”, “V usually greets. He was probably just tired”, and “He can do that if he is tired.”