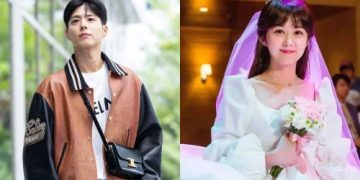 The special reason why Park Bo Gum “rumored boyfriend” was absent at Jang Nara’s wedding this afternoon.
At 6 pm on June 26, the outdoor wedding of actress Jang Nara and her boyfriend will take place in Seoul. Although it is a private wedding without the presence of the media, this can also be called a super wedding when the guests are all famous stars who are close friends of the bride.
Previously, as many sources revealed, actor Park Bo Gum will also be one of the guests of this super wedding. However, Park Bo Gum will be absent from Jang Nara’s wedding this afternoon for special reasons.
It is because he is in Paris for the upcoming Paris Fashion Week, he is a special guest of the fashion house CELINE.
Due to conflicting schedules, he had to be absent from his senior’s wedding.
Park Bo Gum and Jang Nara are famous for being close since the two worked together in I Remember You (2015).
The two maintain a close relationship even in real life when they often visit and support each other’s movies.
Not only that, in 2017, Park Bo Gum and Jang Nara were entangled in dating rumors because of their closeness in real life. However, Jang Nara was quick to deny those rumors.