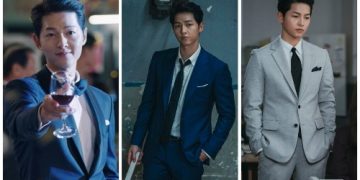 Song Joong Ki has announced his next big-screen project.
As reported by E-Daily on June 24th, Song Joong Ki will star as the main character in “Hwaran” (literal title), a noir film about precarious people who make dangerously risky choices to escape from the hellish reality.

Song Joong Ki recently achieved great success by appearing in simultaneous hit works, tvN’s drama “Vincenzo” and the movie “Space Sweepers”. He is currently in the middle of filming for the fantasy drama “The Youngest Son of a Conglomerate”, which is set to be released in the second half of this year. He now raises more expectations for his role in “Hwaran”, as he continues to establish himself as a trustworthy actor.

Song Joong Ki’s charismatic and convincing performance in the catty noir genre as shown through “Vincenzo” adds to viewers’ anticipation for his upcoming portrayal in “Hwaran”.