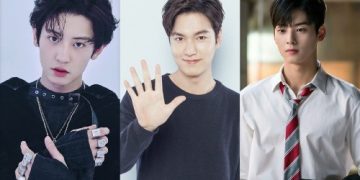 Shooting to fame thanks to his iconic role in “Boys Over Flowers”, Lee Min Ho has been a top actor since then with successful comebacks in popular dramas such as “The Heirs”, “City Hunter”, “Legend of The Blue Sea”, “The King: Eternal Monarch”. Lee Min Ho is one of the actors that contributed greatly to the Hallyu wave.

Starting out as an idol, Cha Eun Woo soon achieved success as an actor thanks to his flawlessly handsome visuals that earned him the nickname “face genius”. Although his acting skills still draw mixed reactions, Cha Eun Woo’s charm is without doubt overflowing.

Like Cha Eun Woo, Chan Yeol is an idol-turned actor who is best known as a member of EXO. Despite facing prejudices against idol actors, Chan Yeol still managed to leave a good impression with his roles in “Missing 9”, “Memories of Alhambra”,…

Lee Jong Suk is one of the most loved Korean actors not only in Korea but also across Asia. Leading well-known dramas namely “Doctor Stranger”, “I Can Hear Your Voice”, “W: Two Worlds”, “When You Were Sleeping”, and more, Lee Jong Suk has captured the hearts of many viewers.

Park Seo Joon’s natural acting and outstanding charisma every time he appears on the screen easily explain why he became so famous. Starring in buzzworthy dramas such as “What’s Wrong With Secretary Kim?”, “Fight For My Way”, “Itaewon Class”, Park Seo Joon is now one of the most sought-after actors not only in the industry.

Not only being popular as BIGBANG’s rapper and visual, Choi Seung Hyun, or TOP, impressed viewers with his acting in “Iris”, “Commitment”, “Tazza: The Hidden Card”, etc.

JinYoung is one of the successful idol-turn-actors. He has many good projects like The Devil Judge, Yumi’s Cells…

Choi Siwon starred in She Was Pretty, Revolution of Love, Work Later, Drink Now… The male artist also received many compliments for his flexible acting skills.